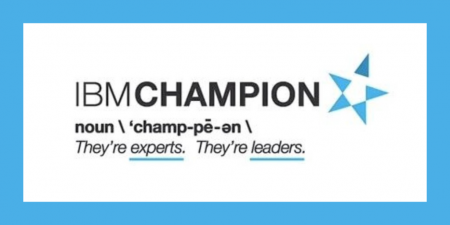 Becoming an IBM Champion for 2020

I was recently nominated to be an IBM Champion for 2020 by NewIntelligence’s President, Corey Mendelsohn, and got the news that I was selected in mid-January, after IBM reviewing and evaluating my contributions to the IBM technology community over the past 12 months.

I am proud to join my fellow NewIntelligence colleagues, Corey Mendelsohn, a Champion for the fourth year in a row in 2020, and Shawn Mandel, VP Consulting Services, now a third-time IBM Champion this year.  As soon as I got the news, I was excited to learn more about what it means to be an IBM Champion, the responsibilities that come with the designation and what rewards and benefits were involved.

By definition, IBM Champions demonstrate both expertise in and extraordinary support and advocacy for IBM technology, communities, and solutions.

The IBM Champion program recognizes these innovative thought leaders in the technical community and rewards these contributions by amplifying their voice and increasing their sphere of influence. IBM Champions are enthusiasts and advocates: IT professionals, business leaders, developers, executives, educators, and influencers who support and mentor others to help them get the most out of IBM software, solutions, and services.

Since my role at NewIntelligence evolved to managing marketing, in addition to sales, in 2017, I have been ensuring that our company’s daily social media posts promote IBM Analytics solutions at least 90% of the time.  In turn, I like and share these posts automatically on my own social networks, as I feel that my connection to IBM extends into my own personal life.  After nearly 9 years of working for an IBM Business Partner, I have seen their Analytics solutions evolve over time to stay inline with competing solutions in the market while still serving the analytics needs of their customer base.  As a direct result, I make sure that I am always up to date in my solution and product knowledge, attending IBM webinars to learn about all the new functionality available every time Cognos Analytics or Planning Analytics puts out a new release.  I also keep my IBM certifications up to date to stay current on the solutions that I market and sell.  Making sure that we sponsor, attend or promote IBM and Analytics events are part of my priorities as well.

I attended the IBM Champion Welcome Call shortly after I got the news of my acceptance and learned more about the program and its benefits on this WebEx.  I found out there are just over 600 IBM Champions this year.  Nearly 1,400 candidates were evaluated (including 2019 Champions) and those that were selected were for their consistent and exceptional contributions beyond the scope of their jobs to content, community, feedback, code and more. The call was led by Libby Ingrassia, Senior WW IBM Champion Program Manager and we were introduced to Executive Sponsor for the program Greg Gorman, Director, Operations, Infrastructure and Open Source of the IBM Developer Ecosystems Group.  Many of the other Executives who act as Program Managers in each of the Business areas introduced themselves on this call as well.

While on this WebEx, I found out that, while being an IBM Champion is its own reward, IBM likes to show how much they appreciate their Champions by offering them certain perks, the first being an Annual IBM Champion merchandise package that allows you to order IBM Champion branded ‘swag’ like clothing and gadgets.  We will also be receiving IBM Digital Badge awards, which I am excited to be able to add to my credentials.  Being an IBM Champion also offers many visibility, recognition and networking opportunities, including exclusive access to online IBM communities; online and offline community recognition; and invitations, discounts and VIP perks at IBM Conferences.  The IBM Champion Community meets on regular calls and has access to an advocacy hub, an exclusive Slack channel, and other communication and networking channels.

With the title of IBM Champion comes certain responsibilities, the main expectation being that you continue to do the kinds of activity you have been doing and participate as an active Champion.  As employees of IBM cannot become IBM Champions, I look at being named a Champion as a unique opportunity to be ambassador for IBM – a role I am honored to take on for the next 12 months and beyond.