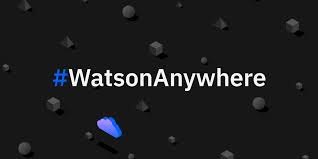 IBM has been helping organizations put Artificial Intelligence (AI) to work to drive meaningful outcomes
for business for many years now. But implementing AI isn’t always a turnkey solution. Often data are spread across an organization sitting in various silos making it difficult to deploy AI at scale. As a result, some companies are limiting their experimentation with AI, which can in turn limit their competitiveness in the marketplace. They can’t always consolidate their data on a single open platform and need AI that can go to where the data lives.

Organizations are modernizing their data architecture, embracing different rungs of the AI Ladder, to collect, organize, and analyze data, and ultimately infuse it with AI. But even those organizations who have climbed the AI ladder face an environment in which their data is spread across a variety of environments: public clouds (with many providers), private clouds, and traditional on-premises deployments. Now, if an organization is deploying and running AI in these environments, they are forced to use the AI from that cloud provider. This is modern day “vendor lock-in,” which can stifle innovation and prevent businesses from scaling AI across their enterprises.

At the THINK 2019 conference hosted in San Francisco, Ginni Rometty, IBM’s CEO announced Watson Anywhere on February 12, 2019. Now, IBM Watson is available to reach data stored on any cloud—anywhere, making it more open and accessible than ever before. The flagship data and analytics platform that was initially built for the IBM Cloud can now be deployed in a variety of environments including VMware, IBM Cloud Private, AWS, Azure, and Google Cloud Platform.

Companies can now run IBM Watson services, including Watson Assistant and Watson OpenScale, through an integration with IBM Cloud Private for Data (ICP for Data) – in any environment – on premises, or on any private, public, hybrid or multicloud.

Watson Assistant is IBM’s AI tool for building conversational interfaces into applications and devices. More advanced than a traditional chatbot, Watson Assistant intelligently determines when to search for a result, when to ask the user for clarification, and when to offload the user to a human for personal assistance. Also, the Watson Assistant Discovery Extension enables organizations to unlock hidden insights in unstructured data and documents.

Watson OpenScale is IBM’s open AI platform for managing multiple instances of AI, no matter where they were developed – including the ability to explain how AI decisions are being made in real time, for greater transparency and compliance.

ICP for Data is an extension of the hybrid cloud focused on data and analytics that simplifies and unifies how customers collect, organize and analyze data to accelerate the value of data science and AI. The multi-cloud platform delivers a broad range of core data microservices, including Watson Studio, with the option to add more from a growing services catalog. IBM Watson Anywhere is seamlessly integrated with ICP for Data. The combination enables customers to manage end-to-end data workflows to help ensure that data is easily accessible for AI.

In addition to the release of these solutions, IBM announced a forthcoming software capability, called IBM Business Automation Intelligence with Watson. With this new software, business leaders will be able to apply AI directly to applications, helping to strengthen their workforce, from clerical to knowledge workers, to intelligently automate work from the mundane to the complex. In addition, the software will measure the level of impact and effectiveness of AI on business outcomes. IBM Business Automation Intelligence with Watson is anticipated to be available later this year.

IBM anticipates that the multi-cloud strategy of #Watson will not only democratize access to AI technology and expedite the pace of AI adoption but increase IBM’s market share for cloud infrastructure services.  With the announcement of #WatsonAnywhere, IBM is freeing clients from AI vendor lock-in and helping them begin to unlock insights from their data – wherever it resides, taking one big step towards #AIeverywhere.