Forrester evaluates enterprise BI platforms based on differentiation: Where does IBM fall? 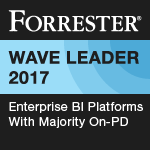 In its latest evaluation of enterprise BI platforms, Forrester has redefined the enterprise BI market, dividing it into two areas: majority on-premises and majority on the cloud (a report for cloud was also published). Vendors appear in only one report. Taking a novel approach, Forrester evaluated vendors based on differentiation rather than on querying, reporting and data visualization, which they describe as “table stakes.”  Based on this redefinition and rigorous criteria, IBM was named a leader.

In the report, Forrester explained why they redefined the market: “BI technology (along with all related ones, such as big data and artificial intelligence) has evolved at lightning speed over the last two years.” Recent changes in BI platforms blur the lines between static reports and interactive visualization, so the two are not separate categories anymore. And, although Forrester split vendors between on-premises and cloud, they noted that cloud really isn’t a separate segment, as the vendors in this report also offer cloud deployments.

In the report, Forrester indicates, “IBM offers a broad and comprehensive BI platform with a touch of AI.” They note that the integration of “long-time BI market-leader” Cognos Analytics with SPSS offers predictive analytics and that “a shot of AI” is provided by Watson Analytics. “Knowledge gaps (or ‘I don’t know what I don’t know’) are a significant missed opportunity in many BI environments, and that’s precisely what Watson Analytics addresses.” Forrester adds that after getting insight without having to know the questions to ask, users can turn it into “comprehensive descriptive and predictive BI applications using Cognos Analytics and SPSS.”